My blog last week – reflecting on the past sixty years of travel, with the emphasis on my journey through central Africa thirty years ago – has left me still thinking about how fundamentally different travel was in those days; politically, economically and in all things technological.

In the early 1980s Europe was cut in half, Latin America was dominated by military dictators and the Cold War kept many modern-day destinations (such as Cuba, Mozambique, central Asia) off limits. China, with close to a billion Mao suits, was as good as unreachable and apartheid dominated South Africa. Countries like Namibia, South Sudan and Croatia had yet to gain independence, and the Arctic and Antarctic were only accessible if you were a scientist or polar explorer. Africa, as a continent, was the least visited and was deemed worth only 150 pages in The Lonely Planet guide. The South Pacific felt as far away as the moon.

The demographics of the world’s politics and economics meant that the vast majority of travellers in the 1950s were of Western origin and independently wealthy. This changed in the 1960s and 1970s as travellers began to cross the globe in search of alternative lifestyles. Hippy caravans began to move eastwards towards Asia, at the same time as independently minded travellers hit the road across all five continents.

By the time I started travelling in 1980 there was a well-established global travelling culture and hitch-hiking was at its zenith. Destinations such as north America were much more liberal than they are today. For example, having hitch-hiked the length and breadth of USA and Canada in 1981, I can testify that barely a ride went by without the driver producing some high quality weed, generous local knowledge and the occasional dollop of free love. I never once felt threatened or in danger – apart from the driving standards, that is.

With Western currencies commanding high exchange rates, travellers from Europe, north America, Australasia and Japan were able to focus on long trips across vast distances for a fraction of the cost today.

I do feel privileged to have experienced first-hand the remoter regions of Asia and Africa in the early 1980s. Even as a humble traveller, as opposed to a qualified sociologist, the feeling of responsibility was huge. Sharing a Buddhist monk’s fire at high altitude in the Himalayas was as exciting as being allowed to sleep under an African chief’s village night sky. 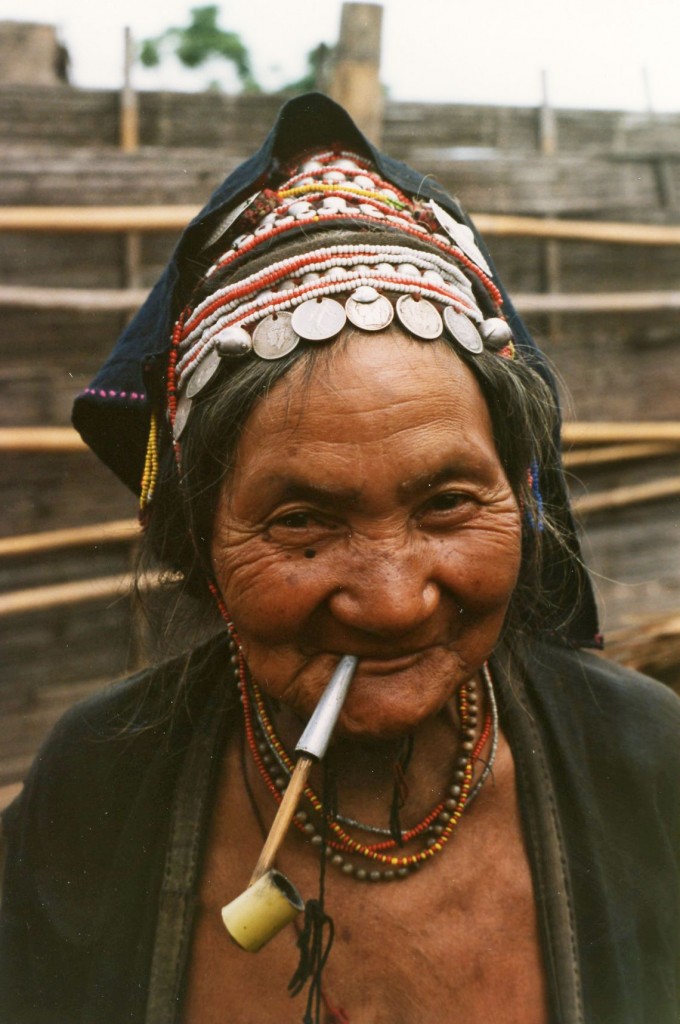 Accessibility to the world’s 300+million indigenous peoples has grown substantially over the last 30 years – equivalent to 6% of the world’s population. 5000 distinct peoples in over 70 countries.

In Africa a thirsty 1980s black market snapped up hard currency at a rate ten times higher than the local banks. This meant that travellers would often have to risk carrying cash throughout their travels. This, along with inaccessibility and lack of pre-travel knowledge, put many a traveller off the Dark Continent. Health was a constant worry, and Africa was the toughest of all continents in this respect. In the year I travelled through Africa I picked up malaria and dysentery as well as several other minor ailments. And then, of course, AIDS swept across the continent in the early 1980s.

You also needed a clear diary, an open mind and a spirit of adventure to travel into the remoter parts of Africa. The political landscape was fragile at best and more often than not, downright unstable. Road blocks manned by child soldiers, as well as guns and rocket launchers provided the most intimidating sight to any traveller – drunk, armed and bored men in uniforms. 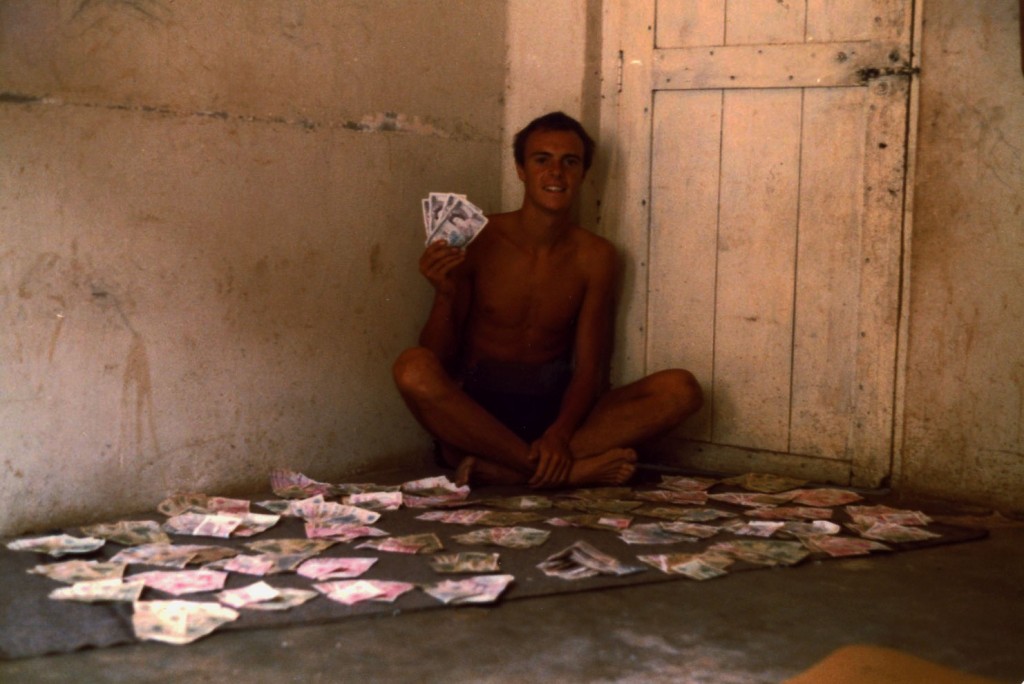 In comparison to the fingertip mobile phone technology of today, we were in the dark ages. Independent travellers were truly on the road solo, with little or no outside communication. Books, a Walkman tape machine and photos in your money-belt were the only link to home.

The price of an international telephone call was equivalent to a week’s travelling budget. This meant that each country’s main Post Office became the umbilical cord to friends and family. Post Restante pigeon holes, with letters from home, were our only 1980s social media platform. Aerogrammes were the closest anyone got to a SKYPE call. And even then it required miniature hand-writing skills in order to cram as much information as possible onto a sheet the size of A4 paper. The trick was to slip in an extra 3 inch sheet of paper, without noticeably upping the weight load. 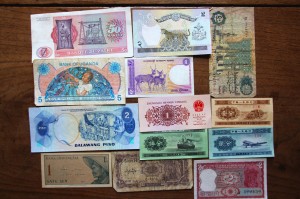 Travel itself was notoriously difficult to plan and pace. The lack of worthwhile guidebooks meant that fellow travellers, coming from the opposite direction, were the bush telegraph’s most reliable source of information. Such chance meetings could send you off in a totally different direction for months on end. On one occasion I arrived in Nairobi a full six months after I had written to tell my family I would be there. All my precious mail from home had been ‘returned to sender’.

Yesteryear’s version of the internet was a once-in-a-blue-moon trip to a British Council reading room, where whole football seasons could be caught up with by back-tracking through old newspapers.

Technology, or the lack of, in the 1980s also impacted on the equipment we travelled with. No digital cameras meant carrying rolls of film which were expensive to buy and print, easy to lose and as fragile as an upset stomach. Sunscreen might as well have not been invented, and the concept of a travel app manifested itself in the form of a handheld compass. Toilet paper was invariably the book you were reading and purified water was either boiled over a camp fire or peppered with iodine drops. 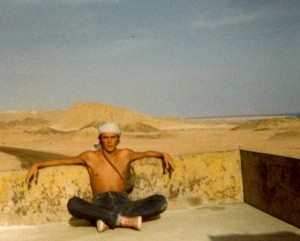 Today, diaries have been replaced by blogs and online chat rooms have taken the place of guidebooks. The traveller can communicate and share their trip, often in real time, with friends and family. For example my niece is presently travelling through Java, and while I am very much looking forward to catching up with her travel stories and photos, I am already fairly up to date from her regular social media updates.

Travellers-cheques now feel as ancient as the Dead Sea scrolls. Credit cards and ATM machines have replaced the constant paranoia of losing a sweat-soaked money-belt with worldly belongings. The feeling of isolation in today’s Africa is a far cry from the 1980s too, due to instant global communication, hand-held GPS systems, Facebook, Instagram, Twitter and language translation Apps.

When travelling as a mazungu (white man) through rural Africa in the early 1980s, I soon got used to every single person in sight looking at you all at once, all the time. Although it was initially disconcerting and took time to adapt to, I understood it went with the territory at the time. It could be so intense that I felt like an animal in a zoo. It made me never want to be world famous.

Although humour and a sense of friendship broke down most barriers quickly enough, probably the most alone I ever felt was when I once stepped off a truck in a Rwandan village. Over 150 people surrounded me 360º, ten deep, in a tight circle. Blankly staring from ten feet away, they had the patience and time management skills of a tortoise. As they rubbed their noses and felt their own hair in comparison, I soon realised they were here to stay. When I tried to walk away I felt like a magnet drawing iron filings behind it. I ended up sitting for hours and hours by the side of the road, while more and more people came to join the goon show.

Although I genuinely believed there was no malice, as the day became longer and night began to fall I remember gazing back at nearly a thousand eyes, trying to work out what I would do if I wanted to sleep. I was only twenty years old and spoke not a word of their language, so it took some composure to engage with such a shy, yet obtuse, crowd. 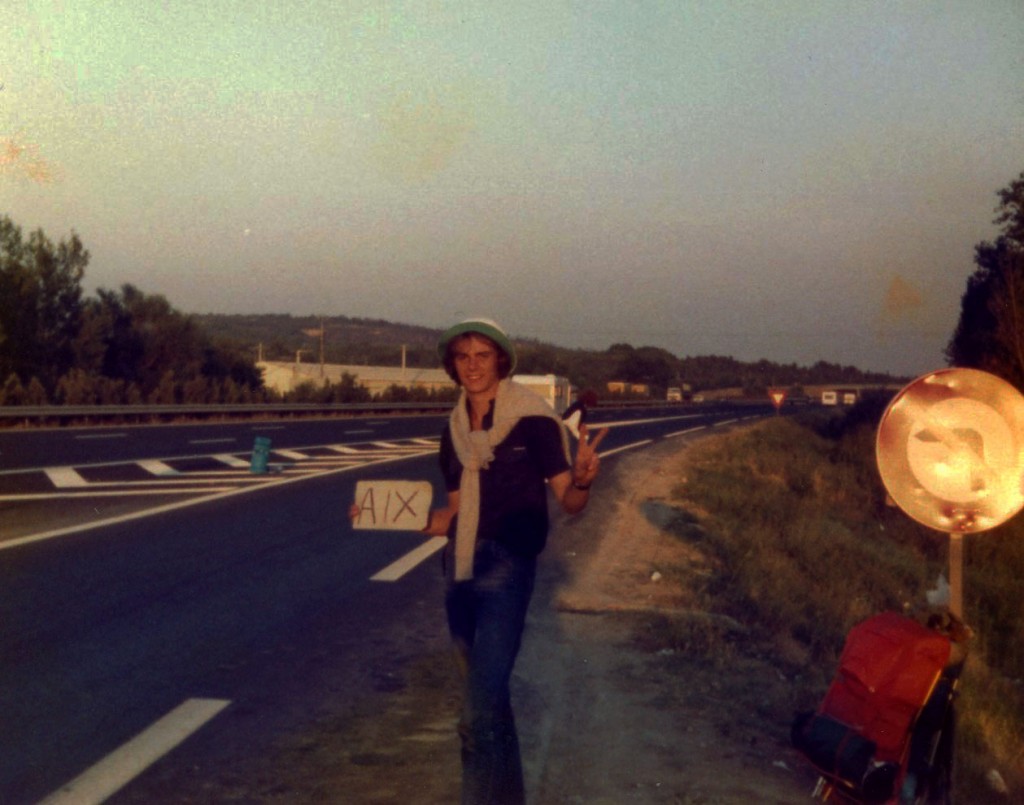 That said, having travelled the world I can genuinely say that the welcome and hospitality I received in Africa was second to none. Like many other travellers, I find the warmth and generosity of people in a foreign land is probably the single most rewarding aspect of travel.

Without local people’s friendship a traveller has no chance to truly enjoy the local flora, fauna and landscape. And although times continue to change, the opportunities to experience the wonders of the world are just as exciting as they have ever been.

So whatever the political, economic or technological developments – just get out there. People are people and their human nature can always be relied upon. 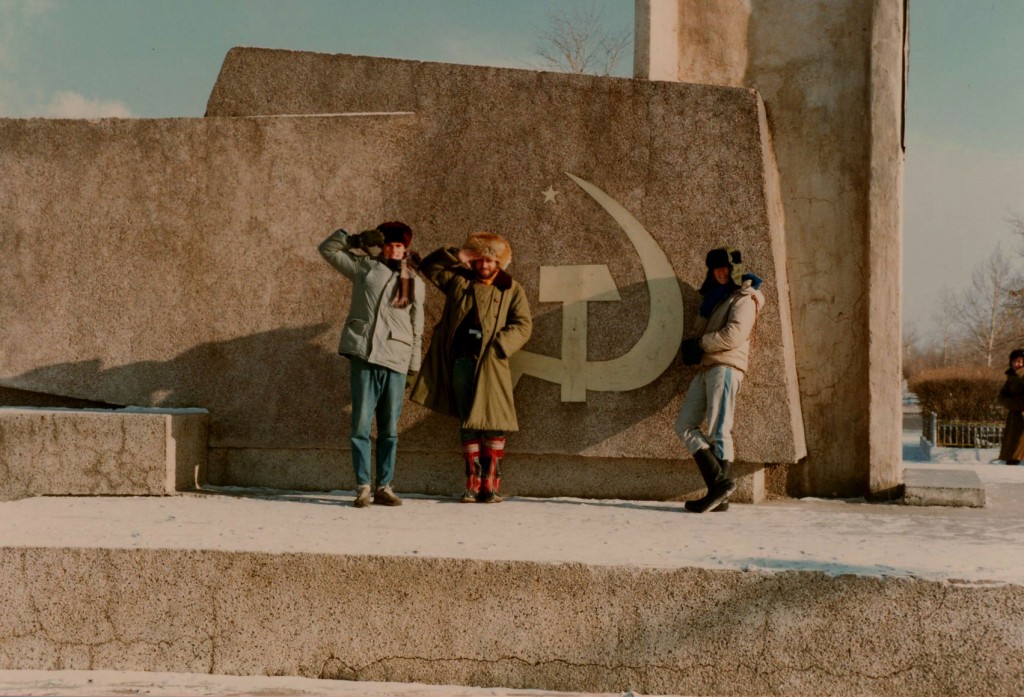 Behind the Iron Curtain 1985 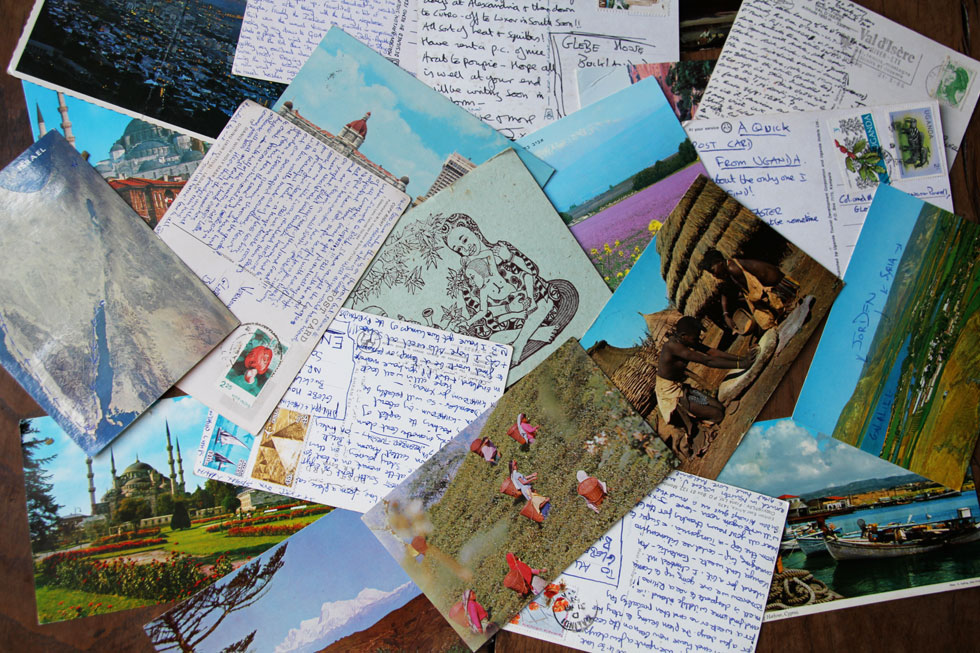