You might think that with over a billion international travellers a year, it would be difficult to find a relatively untouched, under-visited and wholly under-appreciated Wonder of the World. Especially one which is a fairy-tale ancient city exquisitely cut out of sunset-coloured rock, previously lost to the outside world for a thousand years.

Such a place does exist: Petra, in southern Jordan.

Although well-known and rightly raved about by anyone who has been lucky enough to visit, the fact remains Petra is one of the world’s best kept tourist ‘non-secrets’.

This ancient city’s fame has spread across the world ever since it was re-discovered two hundred years ago, in 1812, by Johann Ludwig Burckhardt of Switzerland. In this sense, it is not a secret.

What does make it feel like a secret, however, is that the tourist hordes have been kept at bay by the omnipresent fixation of all things ‘Arab Spring’, which gives the impression that the whole of the Middle East is a riotous battleground.

The absurd fact is that today you can travel as safely through Jordan as you can through the United Kingdom. In fact you are probably more in danger travelling along a British road than up or down Jordan’s Kings Highway or Desert Highway.

It is understandable that the world’s never-ending 24/7 front line news reports have taken their toll on Middle Eastern tourism. So much so that we at Nomadic Thoughts have seen an obvious drop in visitor numbers to Egypt, Libya and Tunisia. There has also been a complete cessation of client chatter about visits to Syria, Lebanon and the Yemen.

The one exception to this rule is however, the Hashemite Kingdom Jordan, which, along with Oman, still ranks as one of our most popular holiday destinations in this region.

We have confidently arranged travel for a significant number of individuals and families over the past couple of years and without exception everyone has returned with exciting tales of local freindship and a sense of wonder at a destination so rich in history and natural beauty.  Jordanian hospitality is legendary across the globe.

Having travelled extensively through Jordan myself over the years, the top of my list has always been Petra.

I first visited this ancient city – described in John William Burgon’s poem as “rose-red as if the blush of dawn / that first beheld them were not yet withdrawn” – in 1995, ten years after it was added to UNESCO’s Cultural Heritage List and twelve years before it was voted one of the ‘Seven Wonders Of the World’.

From the moment you turn off the Kings Highway and follow the winding road down towards the rugged desert outcrop of rocks that hide Petra, you can appreciate how well hidden it has been over the centuries.

When you do finally reach the entrance to the famous Siq rock tunnel that winds through the seemingly impenetrable natural rock ramparts, the magnificent wonder of ancient Petra begins to unfold. After a sandy kilometre you arrive at the Al-Khazneh (Treasury) of Petra, where you are transported back in time to the thriving trade centre capital of the Nabataean empire. Standing as proud as it did when it was inhabited, between 400 B.C. and A.D. 106, the size and colour of the buildings carved from the rock face are astonishing. The Siq gives way to a steep rock gorge littered with a wonder-world of rock caves, houses, temples, theatres, market places and shrines – all cut from the surreal rose-petal red sandstone.

The size of the site is also mind boggling – with the equally stupendous Ad-Deir Monastery, located several miles closer to the 1,000 metres high escarpment that looks down across the vast empty Negev desert. The spread-out site of Petra sits above this world’s-end drop, with magnificent views from The Place of High Sacrifice, Urn Tomboman, Roman style-theatre et all. 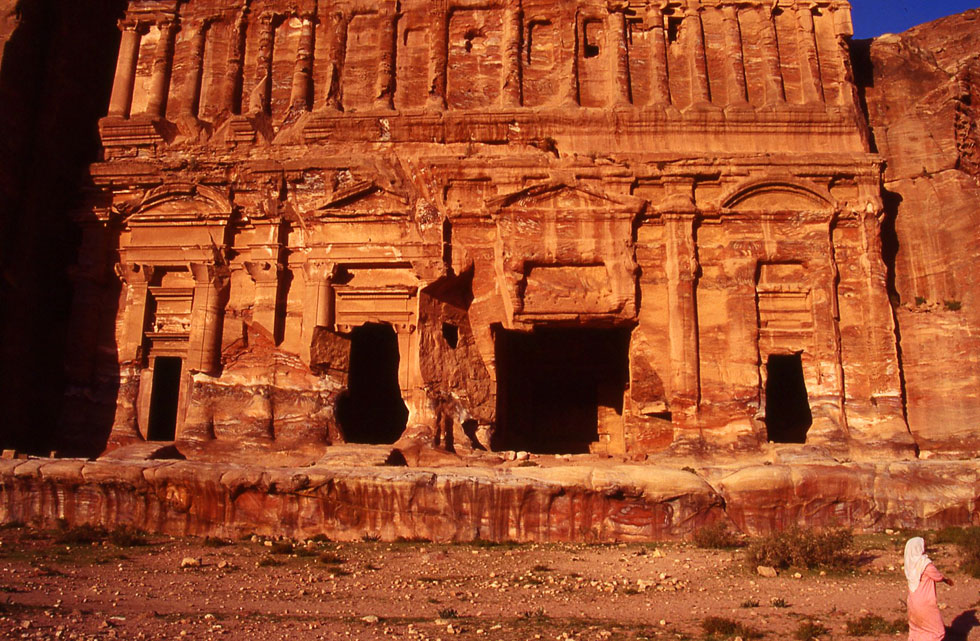 These photos, which I took nearly twenty years ago when visitor numbers were similar to today, capture the same feeling of relative isolation.

So whether inspired by John Burgon, T.E. Lawrence (Lawrence of Arabia), Tintin or Raiders of the Lost Ark, I urge you to go.

We at Nomadic Thoughts know the site intimately and will continue to rave about Petra as one of the world’s most exciting and rewarding ancient venues. Bear in mind that now, due to the relative lack of visitors, you can experience it like perhaps never before.

Open, welcoming and above all, awe-inspiring. 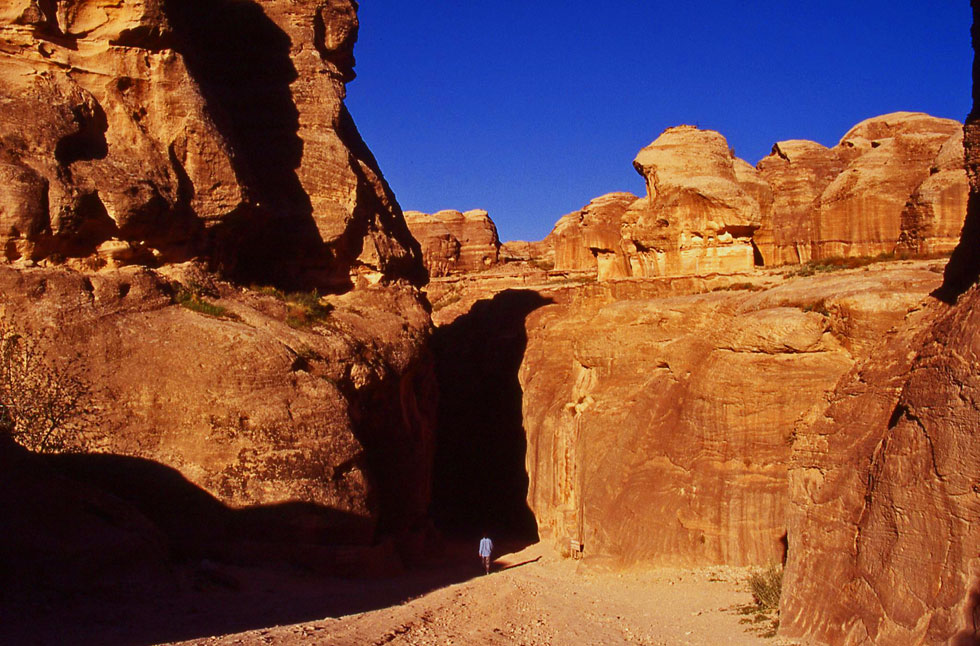 Start of the Siq (entrance to Petra) 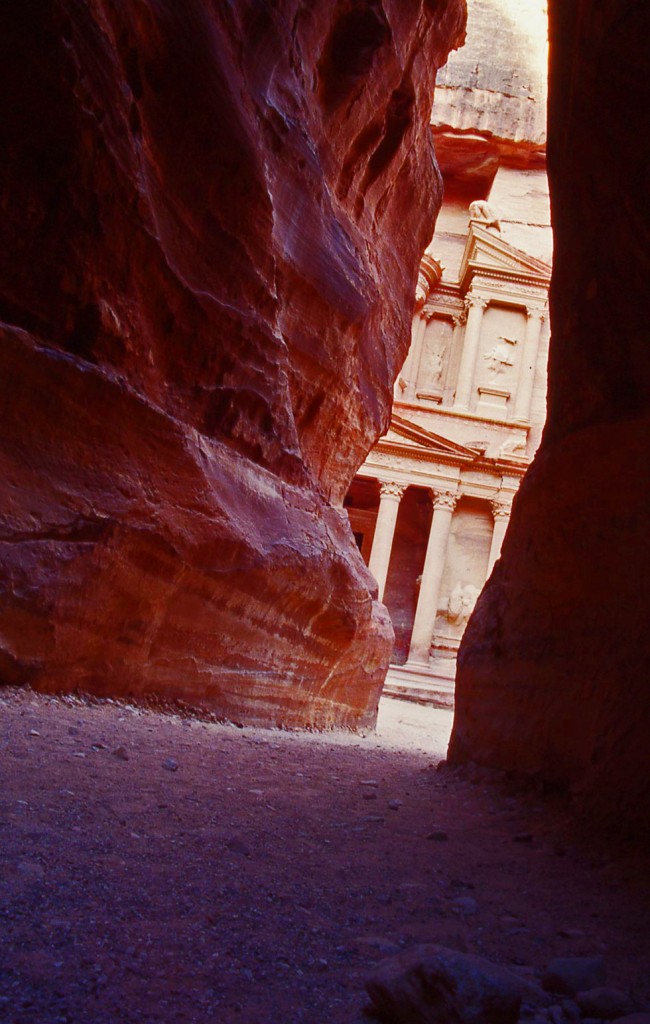 End of Siq – arriving at The Treasury, Petra 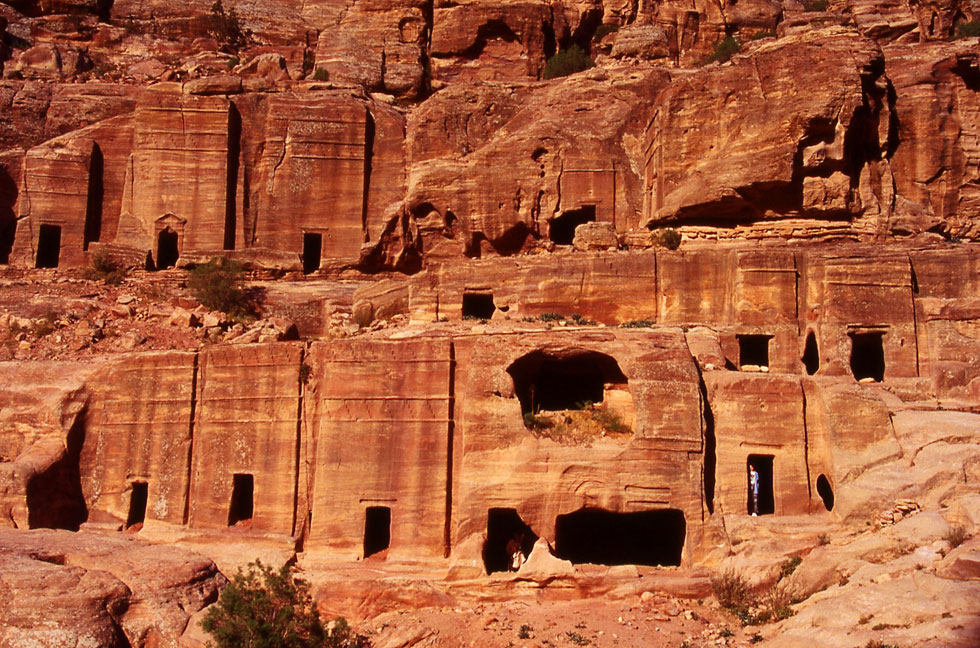 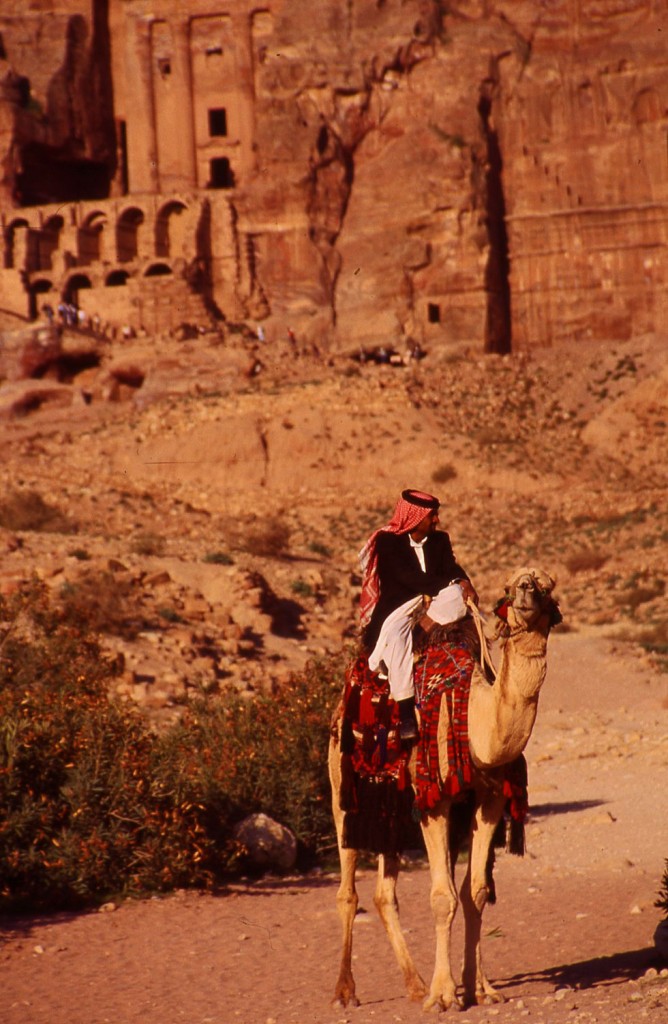 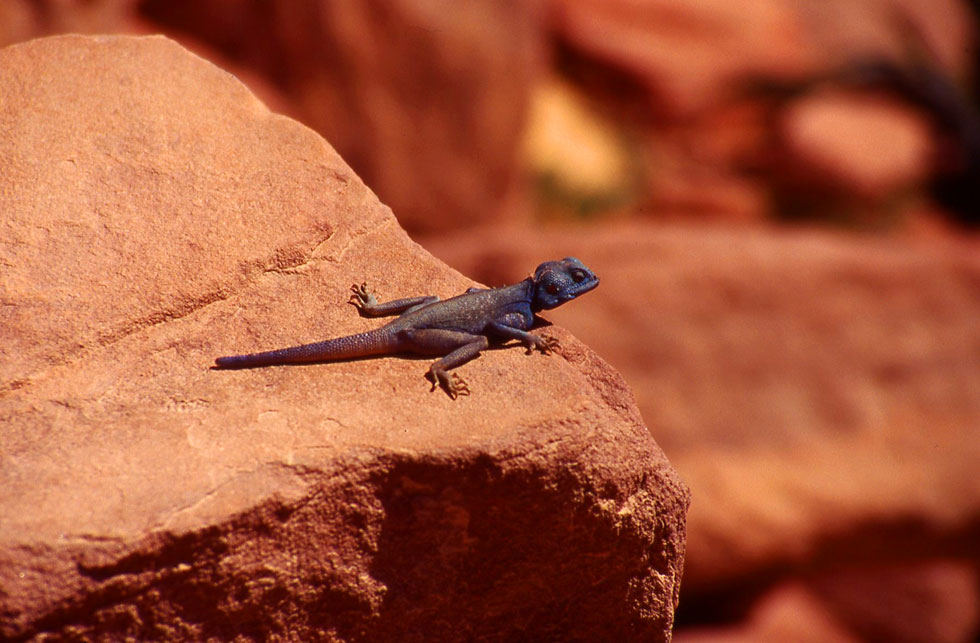 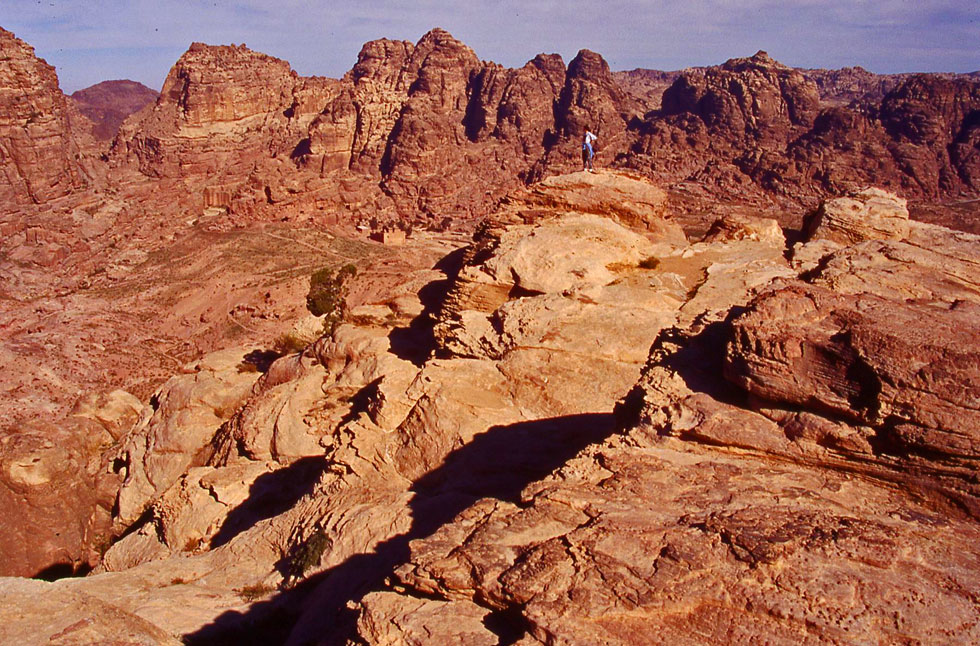 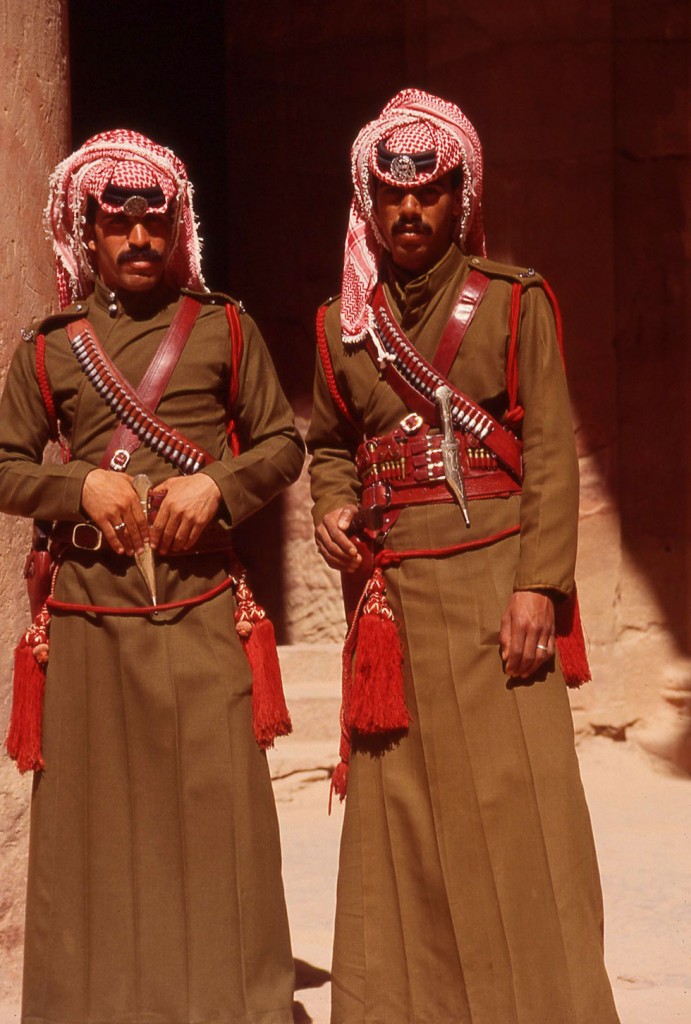 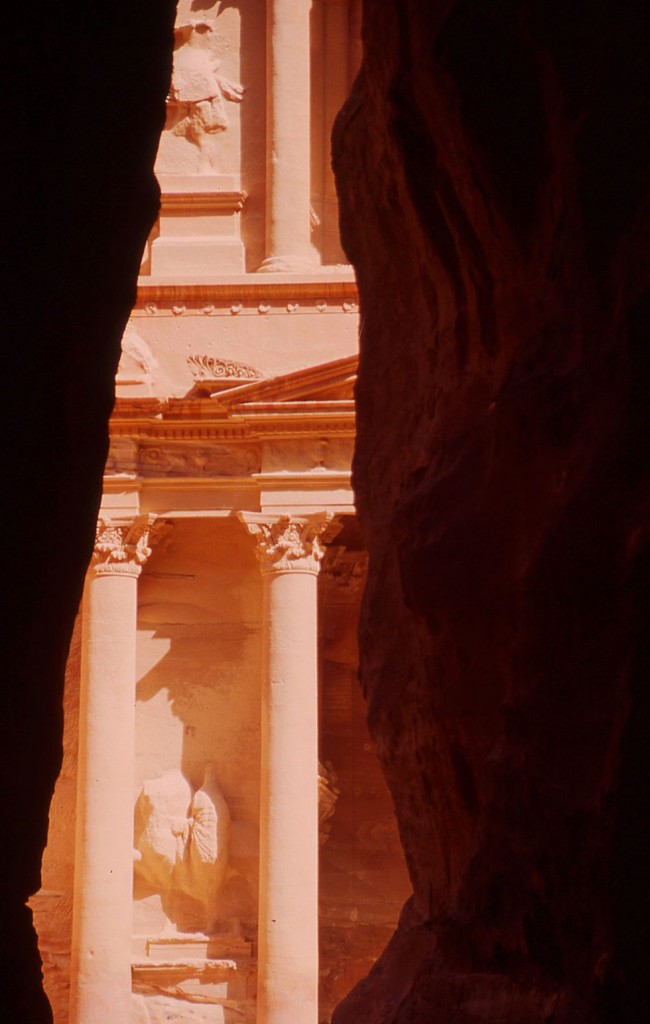 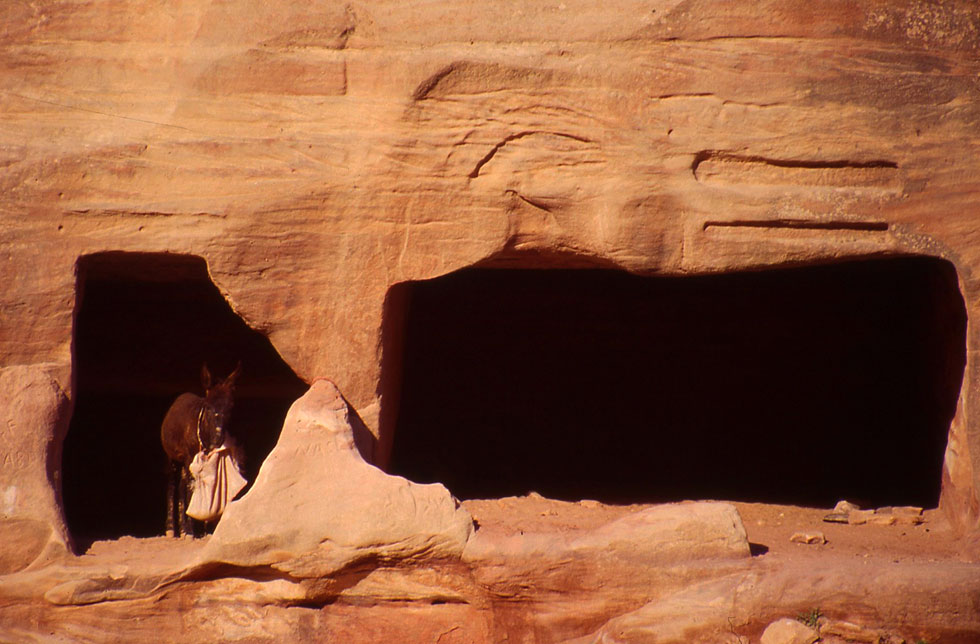