This week has seen the wealthy, the great and the good descend on the Dubai Air Show. Apart from huge visitor numbers, totalling over 60,000 from 122 countries, the most impressive statistic is the show’s order book total.

With only three days of the show complete the total aircraft spend was reported to have topped US$200 billion. 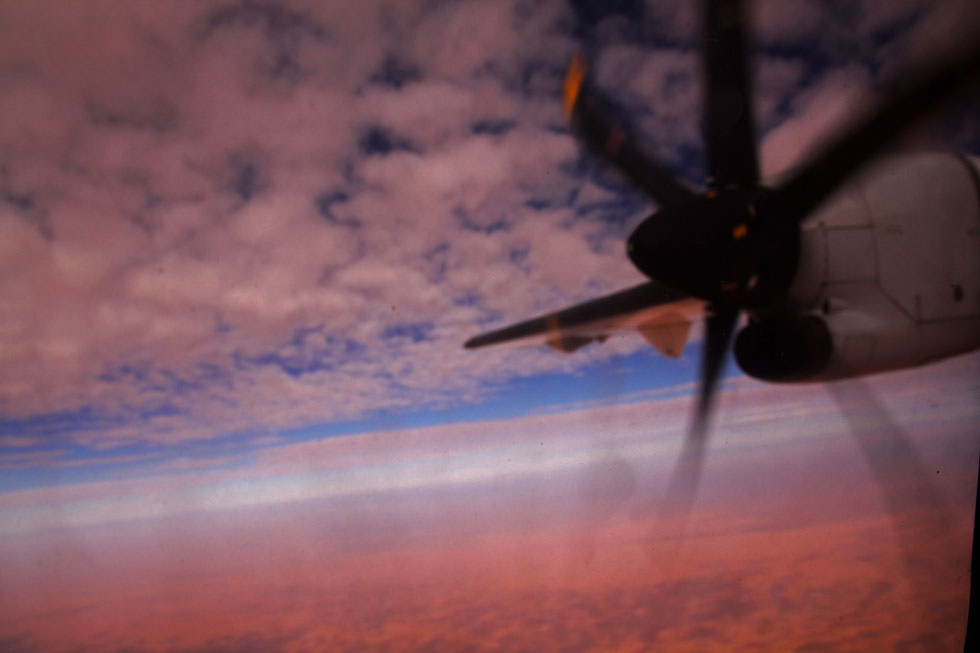 This enormous sum squarely confirms that international air travel is on the rise. Furthermore this figure reinforces the Middle East, and Dubai in particular, as the power-hub of the world’s aviation industry. It lives up to a prediction made at the Paris Air Show ten years ago when the leader of Dubai, Sheikh Mohammed bin Rashid Makto, stated that ‘the aviation world was about to change’. 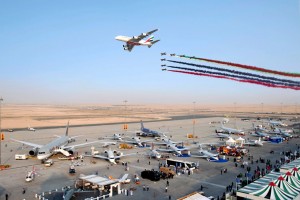 As a show, this week’s spectacle in Dubai offers all the trappings of a highly polished event; the newly constructed ‘Skyview’ grandstand allows for a perfect view of the fastest, newest and most impressive fly-past aircraft. The team sheet includes the traditional Royal Air Force Aerobatic Team, the Red Arrows, as well as the debut performing Al Fusan aerobatic team from the UAE. The show has 1,055 exhibitors from 60 countries selling their wares. Boys will rarely find bigger toys than in this impressive array of aircraft.

In broader terms the Dubai Air Show serves as a benchmark at this moment in ‘aviation time’. Today Emirates, Etihad and Qatar Airlines (the three Persian Gulf carriers) continue to blaze a trail as the leading force in international aviation. With orders of long-haul aircraft stretching into the hundreds of millions of US dollars, the Boeing and Airbus order books are growing just as fast as the aircraft landing capacity offered by Dubai, Abu Dhabi and Doha. 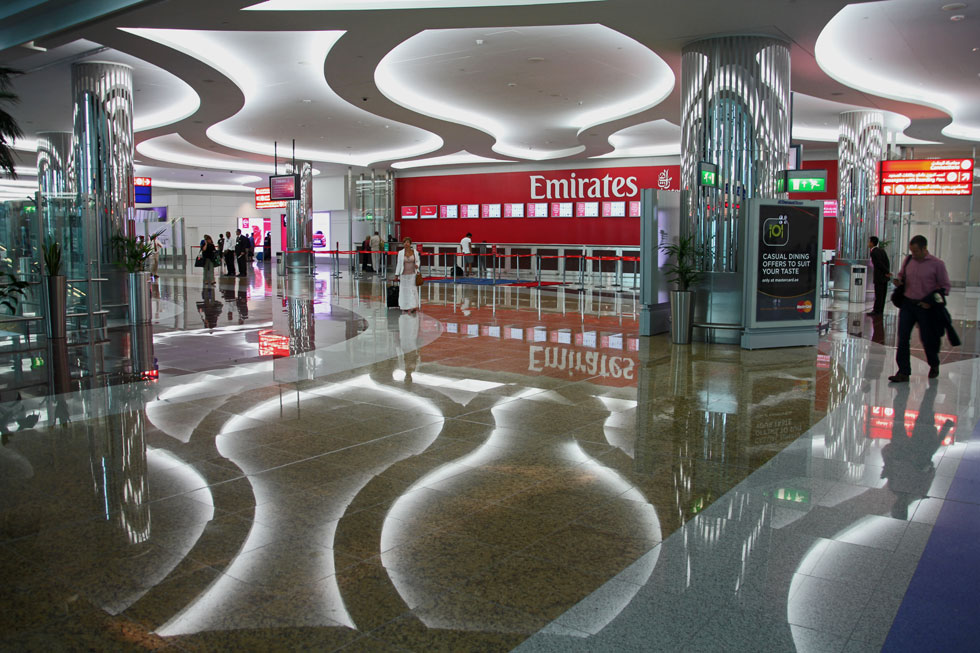 Dubai has expanded its new airport to focus on serving aircraft with 18-hour flying capacity, thereby offering a huge capacity to long-haul aircraft capable of reaching the world’s biggest airports. This is in stark contrast to London – with very different planning, financing and political constraints – which struggles to address, let alone act upon Heathrow, Gatwick et all’s future ‘world-hub status’.

Dubai’s ever-expanding desert-set airport infrastructure alone is remarkable. For example when I recently flew into Dubai, on one of their new A380 aircraft, it soon became obvious how easily their newly designed airport could cope with the proposed doubling of Dubai visitors, from 10 to 20 million, in the next six years. Indeed as Middle Eastern hubs expand it is difficult to see how traditional North American and European carriers can compete. The low-tax, low-wage and government supported aviation industry benefits hugely from being located in a part of the world where low cost fuel comes out of the ground. Airline staff pay no income tax, corporation tax is non-existent and there appear to be no planning or expansion issues. 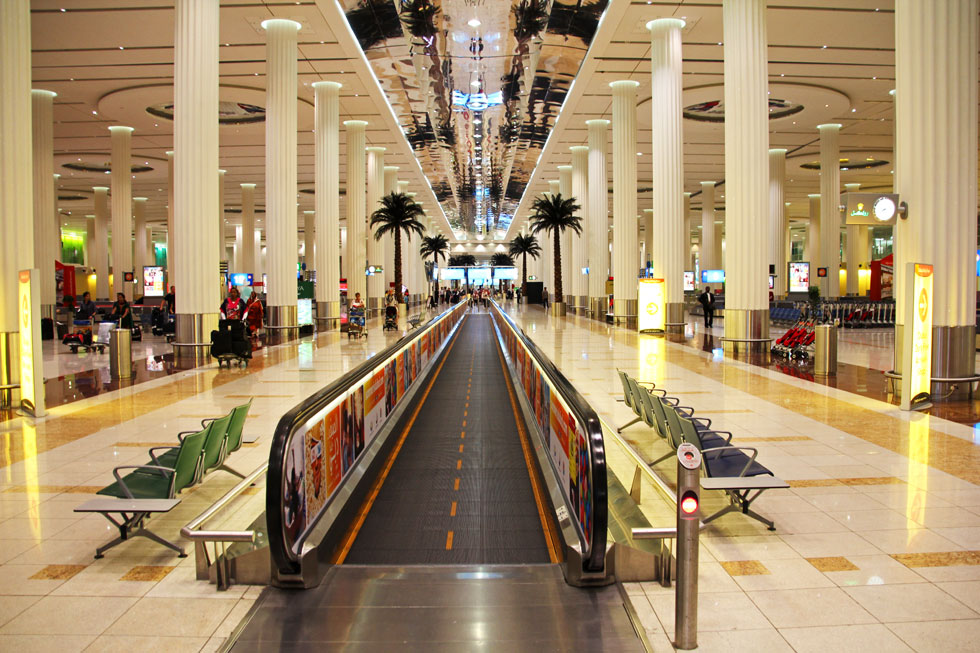 Despite the world-economic slowdown – which seriously impacted on Dubai property prices – the airline recently returned 4% profits on US$21 billion sales. A PR drive has seen three of Europe’s most well-known football teams (AC Milan, Paris St Germain and Arsenal) benefit from Emirates sponsorship. Asian, African, American, Australasian and European travellers have become only too aware of how efficient the fleet of double-decker A380s, mini-jumbo 777X and A350s are. Equally essential has been the falling cost per-seat-mile, which has now begun to seriously impact on how international travellers of today can plan their journeys.

Times continue to change elsewhere too; away from the Middle East the world’s airports are receiving a makeover, if not expansion re-fit. For example Paris Charles de Gaulle and Stockholm airports are among my favourite ‘natural-light-designs’. 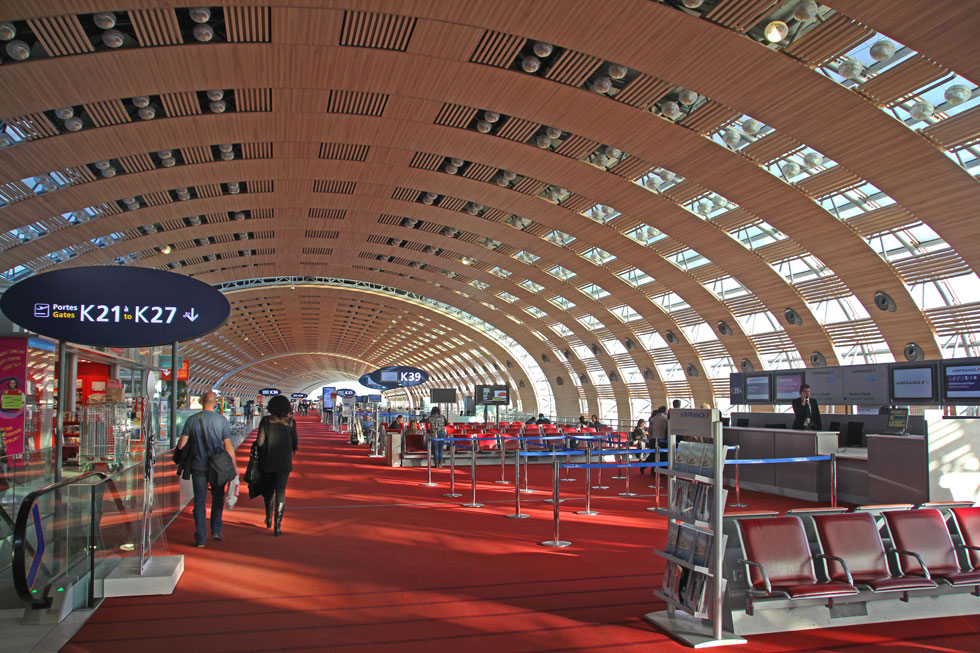 The increasingly important debate over which direction London will go in choosing, designing and building its new hub airport is gathering pace. With the need for a well-planned and well thought through decision over how best to retain our capital’s position at the heart of global aviation, not to be taken lightly. 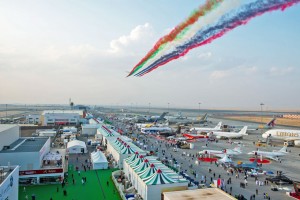 So while the Red Arrows enjoy being one of the most well-known performers at this week’s Dubai Air Show, the pilots and crew would do well to take serious stock during their five-week Middle Eastern tour with stop-offs in Al Ain, Abu Dhabi, Oman, Kuwait, Jordan and Saudi Arabia.

The aviation world is changing and London has some major challenges ahead if it is to keep abreast of those changes. The Dubai Air show, with its impressive global aerospace industry presence, has shown that it is very much a place and event to start tapping into.

Albeit divine retribution might afford London a wry smile – as today, the fifth and final day of the show, has been cancelled due to a “dramatic downpour”. Thereby reiterating the fact that local expertise is always important when addressing the wider issue in running an airport hub. Snow we, in London, might be hopeless at dealing with – rain we do well. 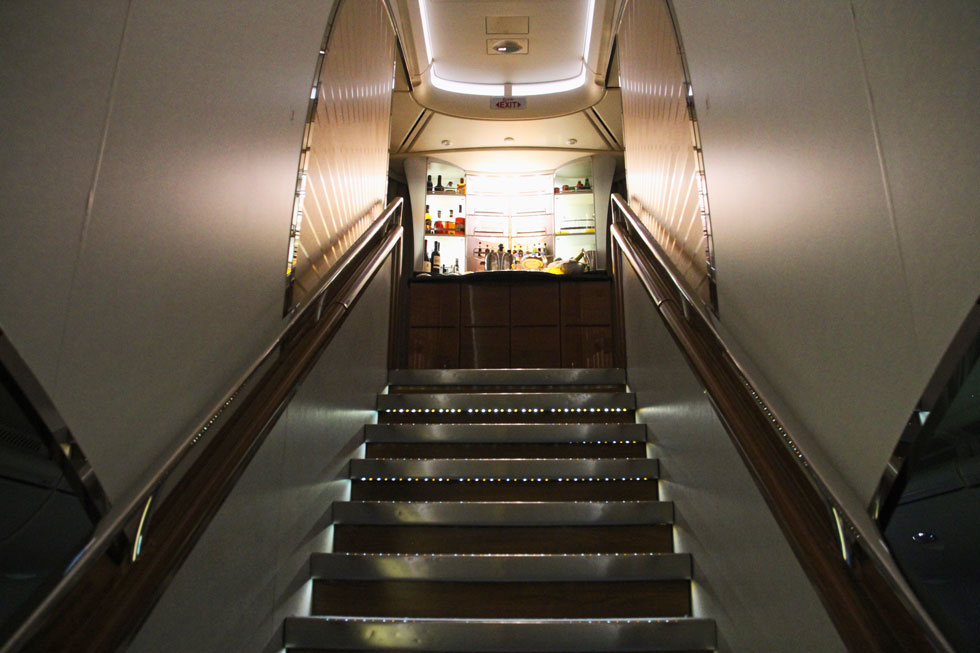 A380 Upper Class staircase entrance – more akin to a nightclub 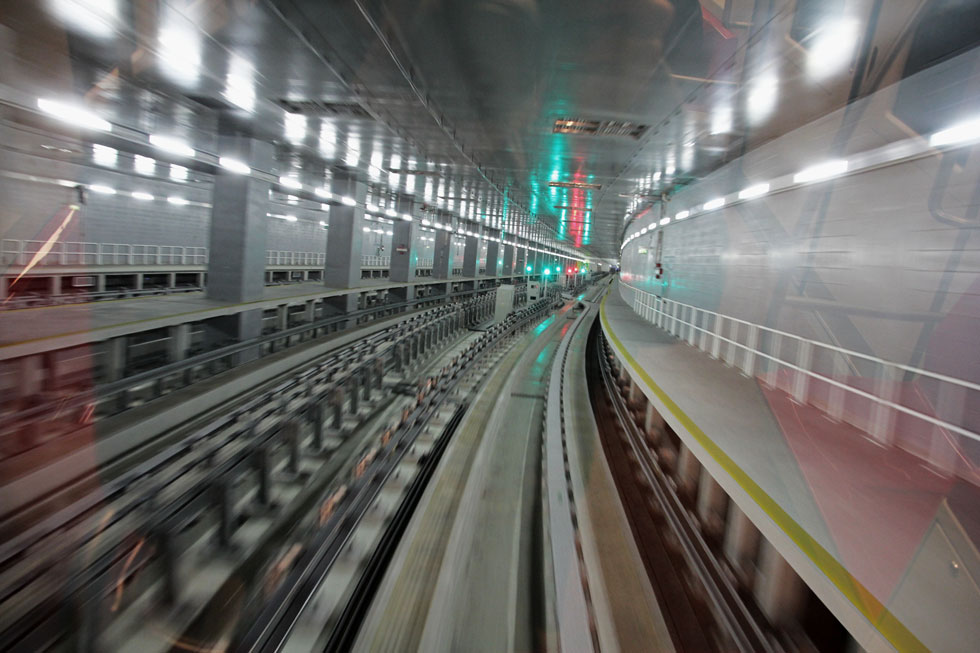 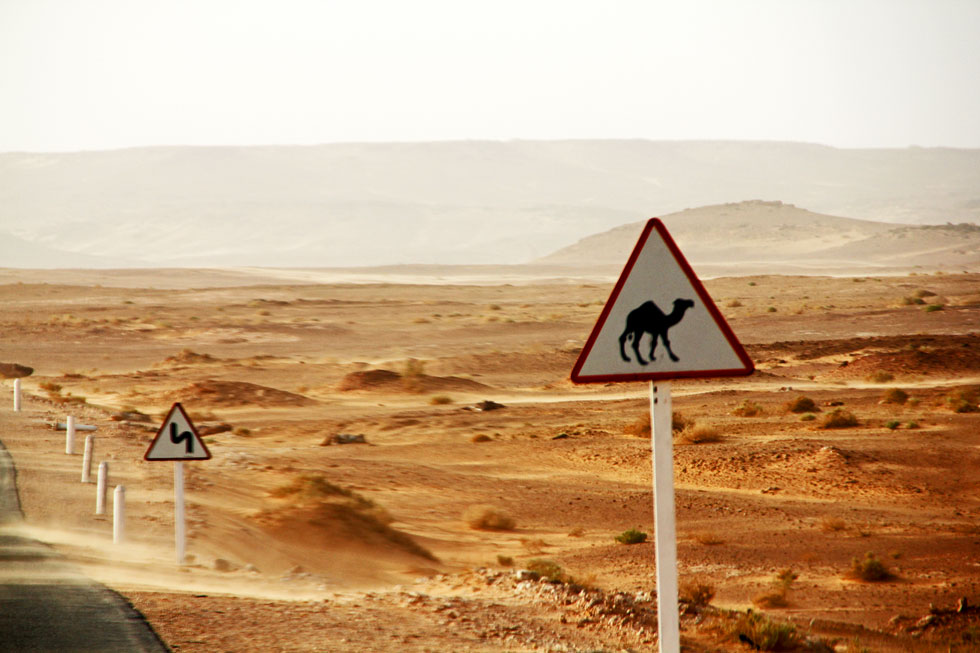 All a far cry from traditional Arabian travel options