Armistice Day on the 11th November marks the date that the First World War officially ended – on the eleventh hour, of the eleventh day in 1918. 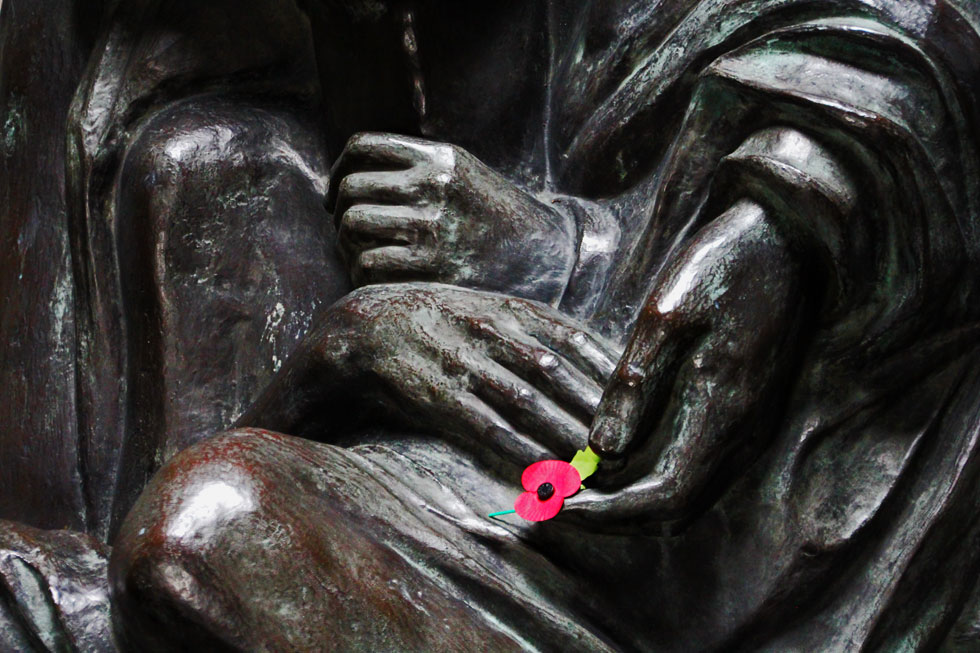 Traditionally it has served as the day those wishing not to forget the millions killed, take the opportunity to remember their fallen. Growing up in a British military family, for me the day always had great significance, especially as it evolved to become Remembrance Day – to include all those killed and affected by all conflicts.

As a school boy we always marked Remembrance Sunday (the Sunday closest to Remembrance Day) with memorial services and cadet parades with the local community. A tradition that has continued over time across not only Britain but many other countries.

On a personal level the Royal British Legion’s Poppy Appeal has always been close to my heart, not least as my father, Mike Vernon-Powell, was Controller of Fundraising for the charity during the 1990s. He played an integral part in re-introducing the two minute silence across the country on 11th November, with a particular emphasis on allowing those who had suffered the loss of a family member to be actively involved in the wide-reaching and all-encompassing remembrance activities.

Irrelevant of which side, country or persuasion the fallen came from, the spirit of Remembrance Day is very much to stop, reflect and remember all of those who have lost their lives as a result of war. 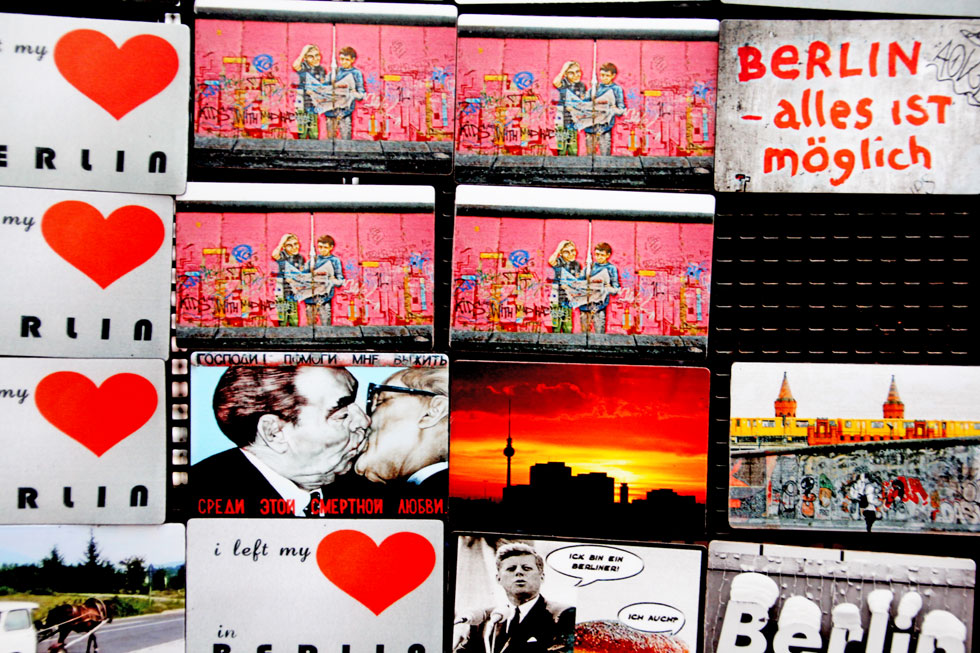 Last weekend I visited Berlin – a city obviously massively affected by war – with my daughter. In addition to thoroughly enjoying the huge diversity of activities, tourist attractions and excitement that is modern day Berlin, we were particularly interested in the diversity of memorials to the victims and the dead. So much so that when we left London we decided to take a poppy and lay it on the German tomb of their unknown soldier.

However, we discovered that the Germans do not have a tomb for an unknown soldier. Instead they have an impressive, compassionate and hugely appropriate selection of memorials to many different conflicts. For a city so obviously affected by the First World War, the Second World War and then the Cold War we found it remarkable how they have on the one hand managed to gracefully pay their respects, whilst on the other embraced ‘peace’ with such vitality. 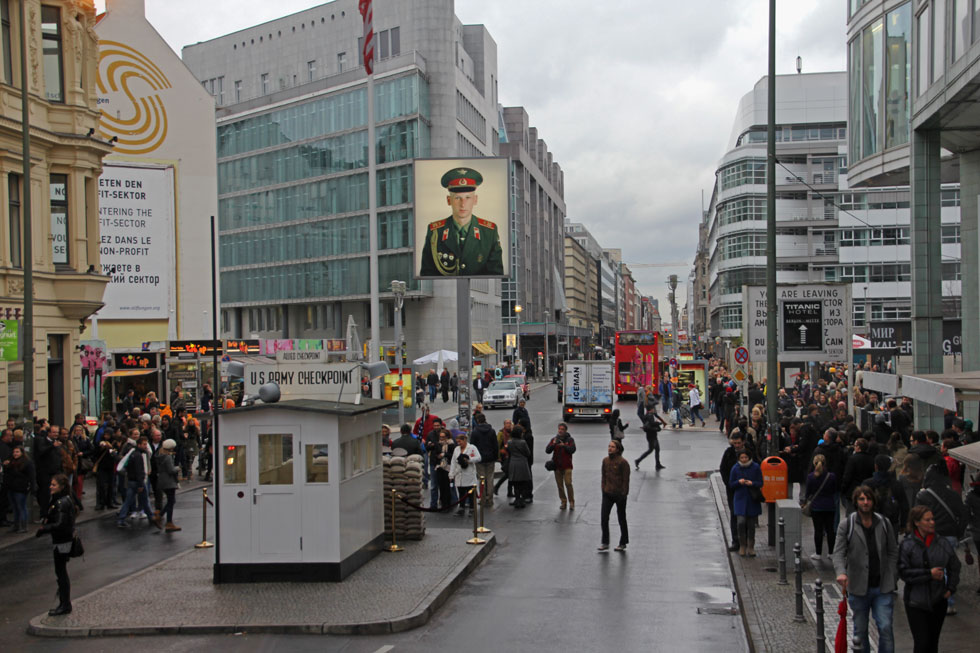 We, like so many other visitors, were bowled over by Berlin. We crammed a week’s worth of visits into a couple of days, which was particularly exciting for me because, as well as living there for two years in the early 1970s (in the height of the Cold War), my last visit had been in 1985 when the Wall was up and West Berlin remained cut off from the outside Western World.

Parading our poppy, we visited some of the most significant memorial sites and finally laid it to rest on the Polynational War Memorial Neue Wache – which is located on Unter den Linden in the centre of what was East Berlin, a short distance from the East/West Brandenberg Gate barrier. 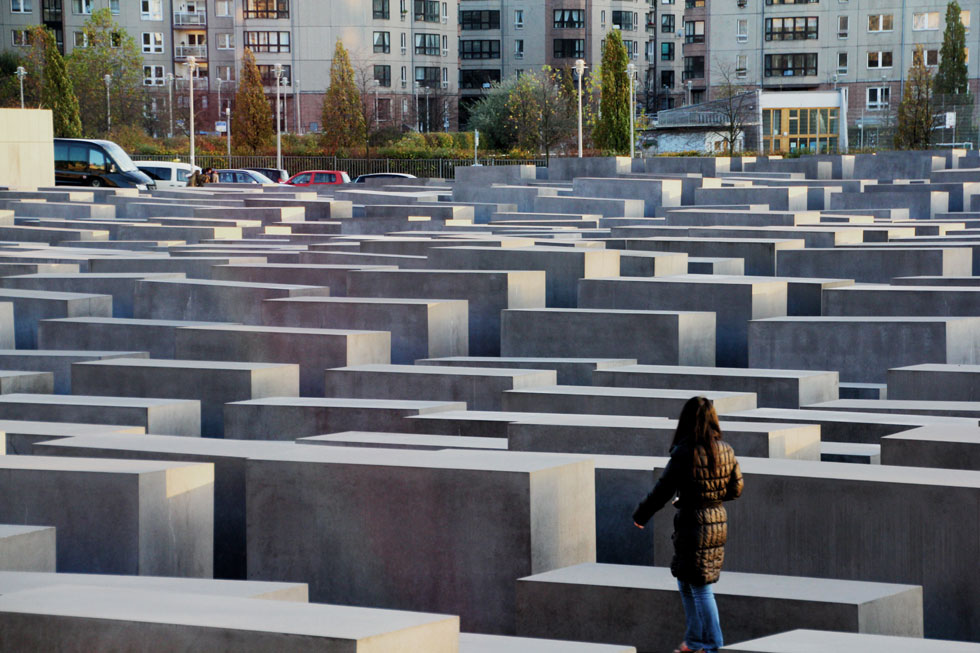 The following photographs highlight a cross-section of Berlin’s remembrance memorials, including the Holocaust Memorial which is in memory of the murdered Jews of Europe. This consists of 2,711 concrete slabs, set out across a 4.7 acre areas. We felt the blocks represented the dead respectfully; their ordered arrangement resembled a cemetery, yet when walking amongst the slabs a darker system of ordered tunnels was the dominant impression.

My daughter took this photo of the raindrops running down the side of one slab – which rather aptly resemble tears. 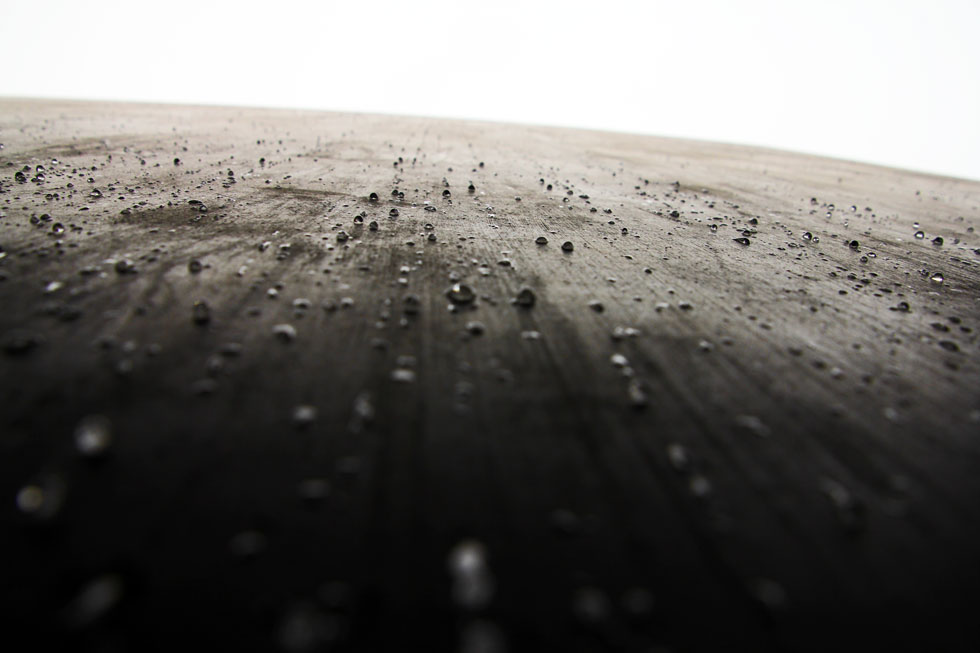 I have also included the Sinti & Roma Memorial, with the small pond in front of the Reichstag. This was erected in honour of those murdered under the National Socialist regime.

The Wall itself, which today doubles up as an outdoor artists’ canvas, remains an impressive and chilling reminder to the city split by the Cold War.

I also include Check Point Charlie which I remember crossing in 1972 on a family day trip into East Berlin. As a ten year old my abiding memory was of how colourless East Berlin was – with no advertising, neon lights or street life. The whole city appeared to be living in the midst of a black & white movie set. Rather poignantly I also remember that we took over disposable lighters to give away, as we had been advised that they were sought after in the belief that anything disposable was a huge western status symbol. How much we as a people and planet will ultimately pay for our disposable capitalist lifestyle, only time will tell. 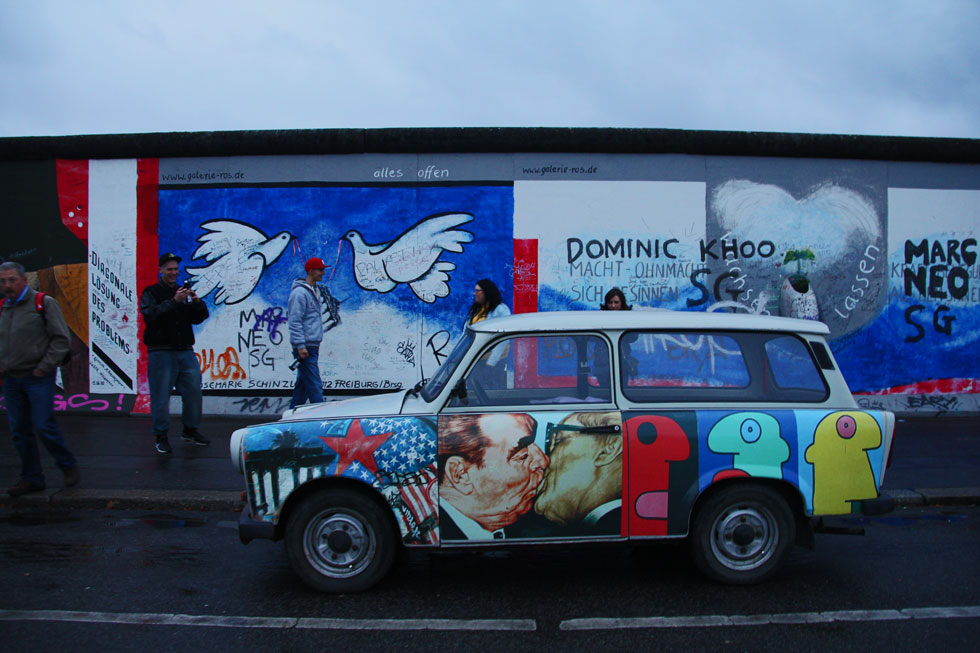 The First World War is highlighted by WW1 human-statues that pose for tourists in front of the Brandenburg Gate. The rack of post cards, Wall graffiti and stack of souvenir military hats all reflect the city’s past politics and the suffering, still in living memory, of recent wars.

Berlin does ‘remembering’ extremely well and I encourage one and all to visit what is one of Europe most exciting modern day cities. 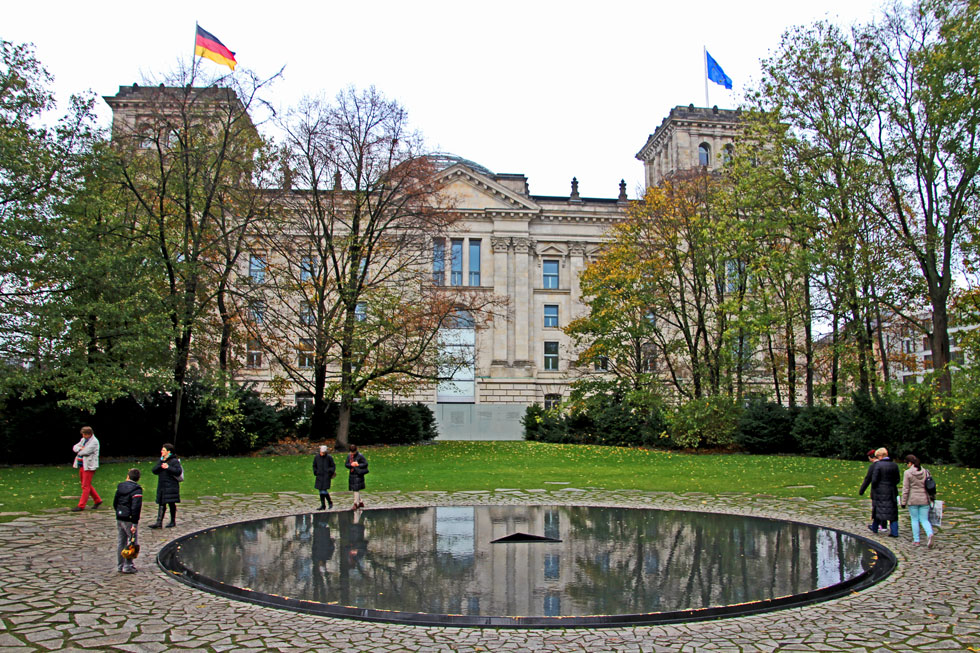 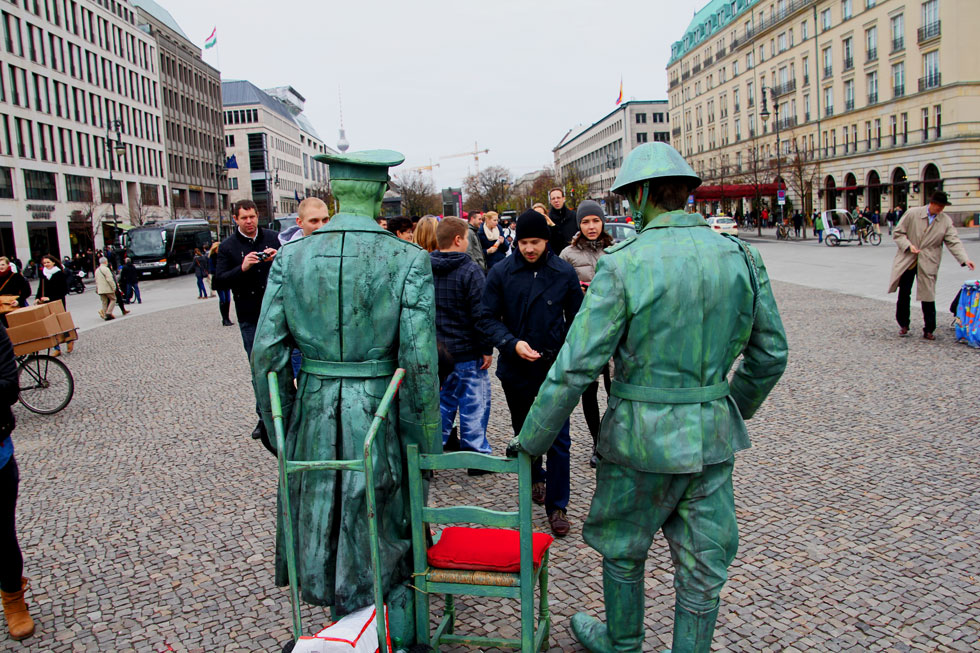 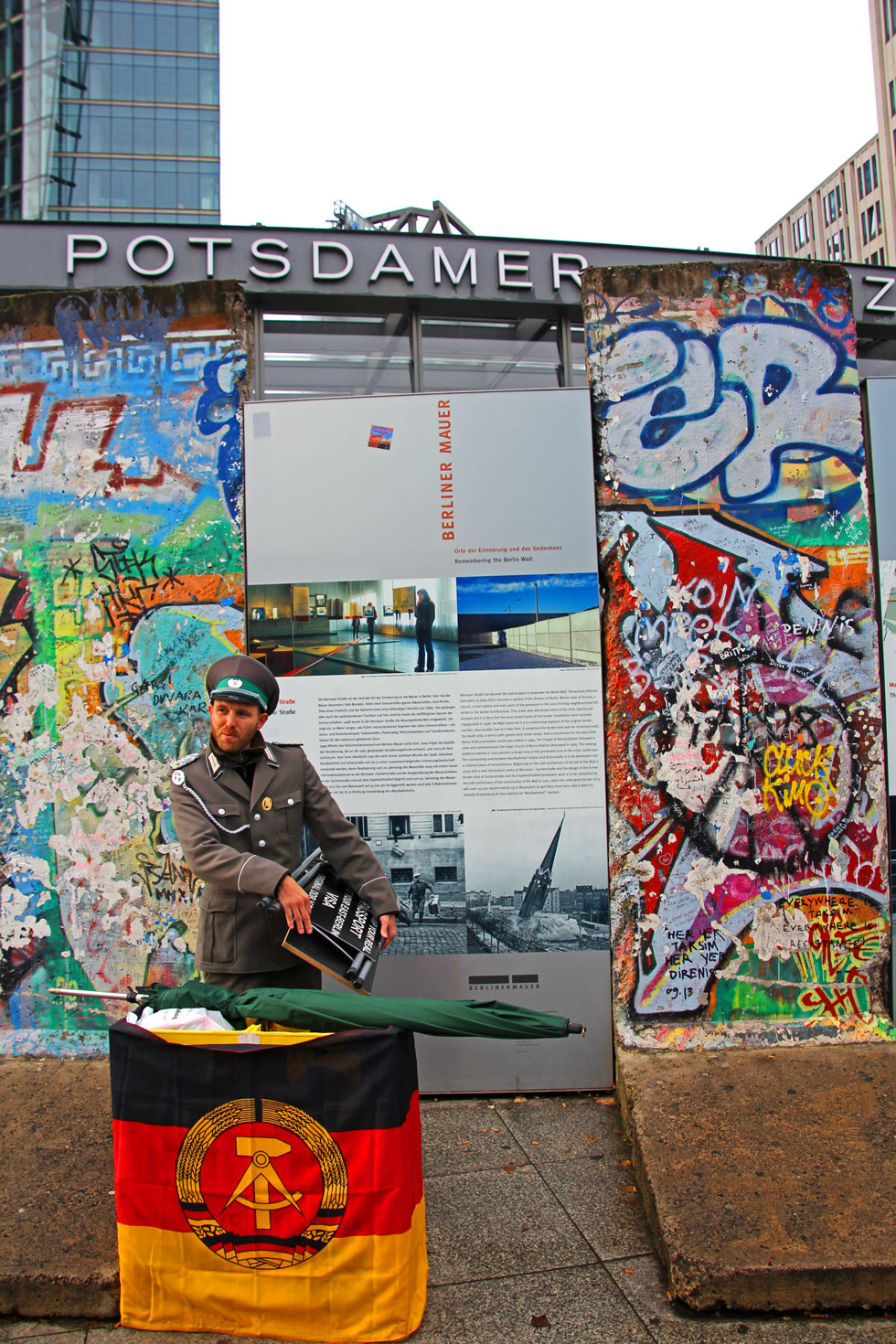 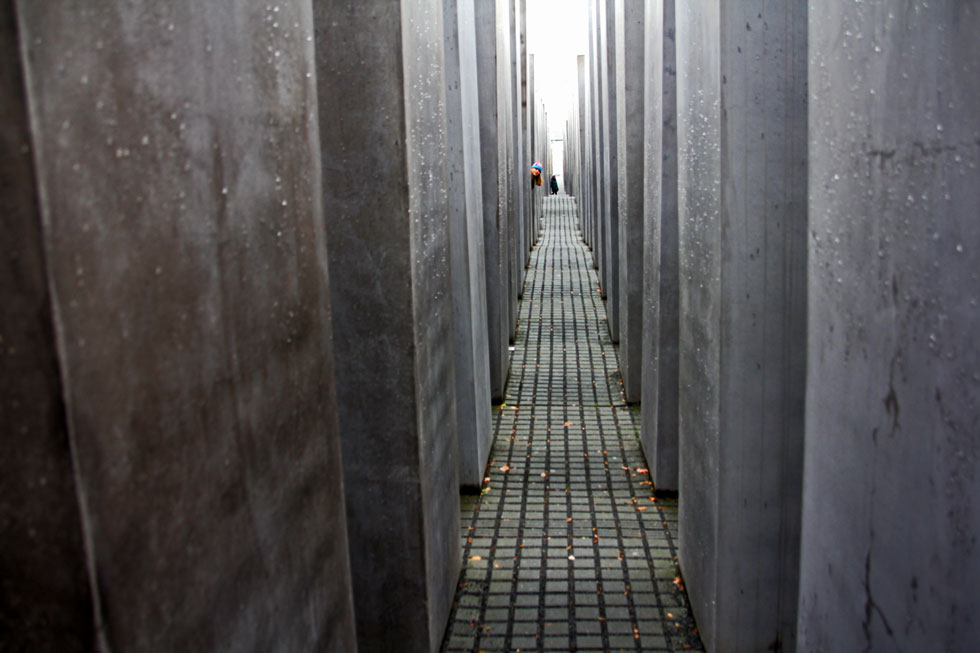 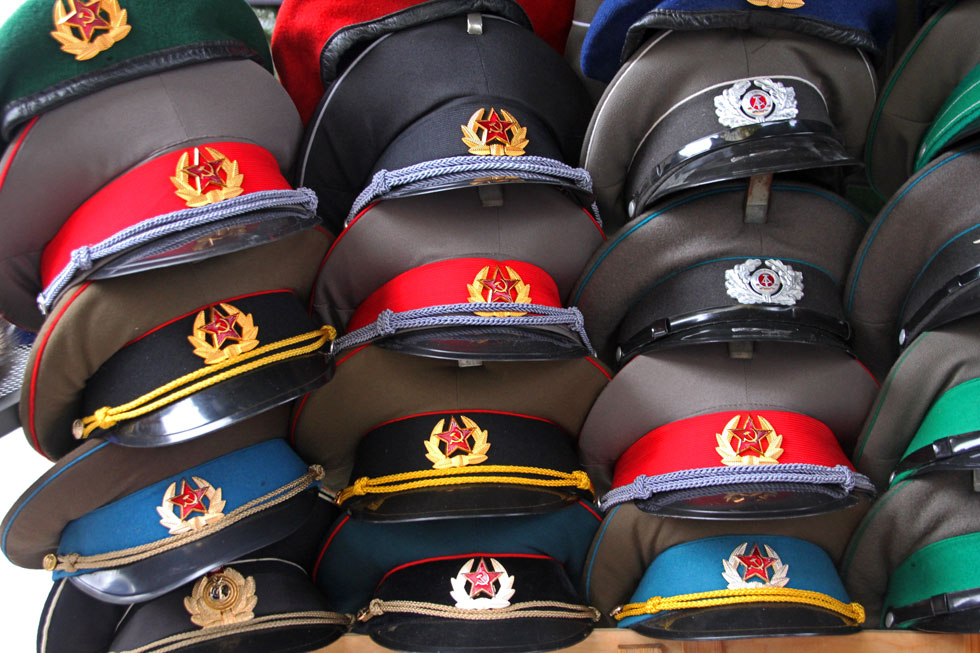 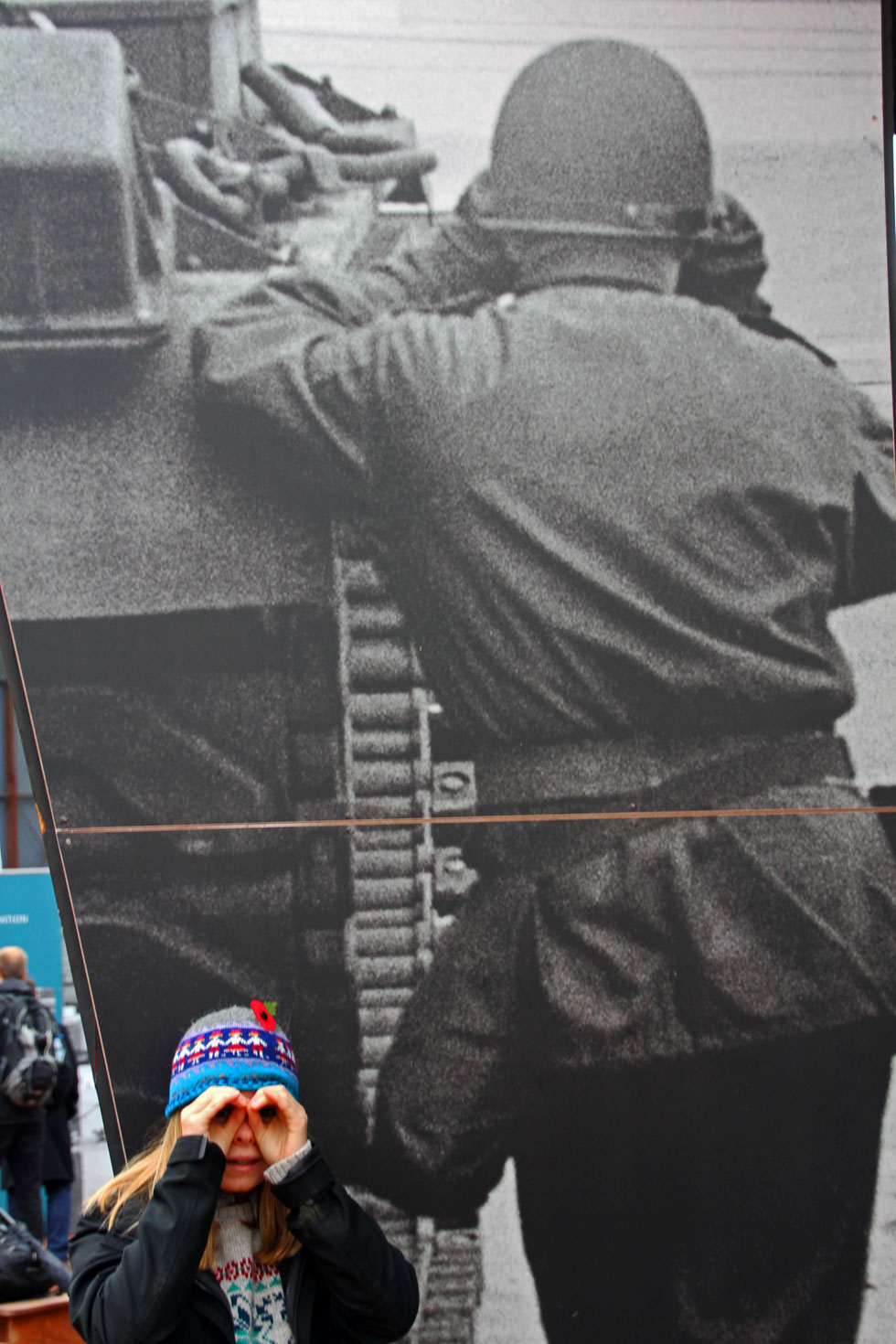 Who’s looking at who? 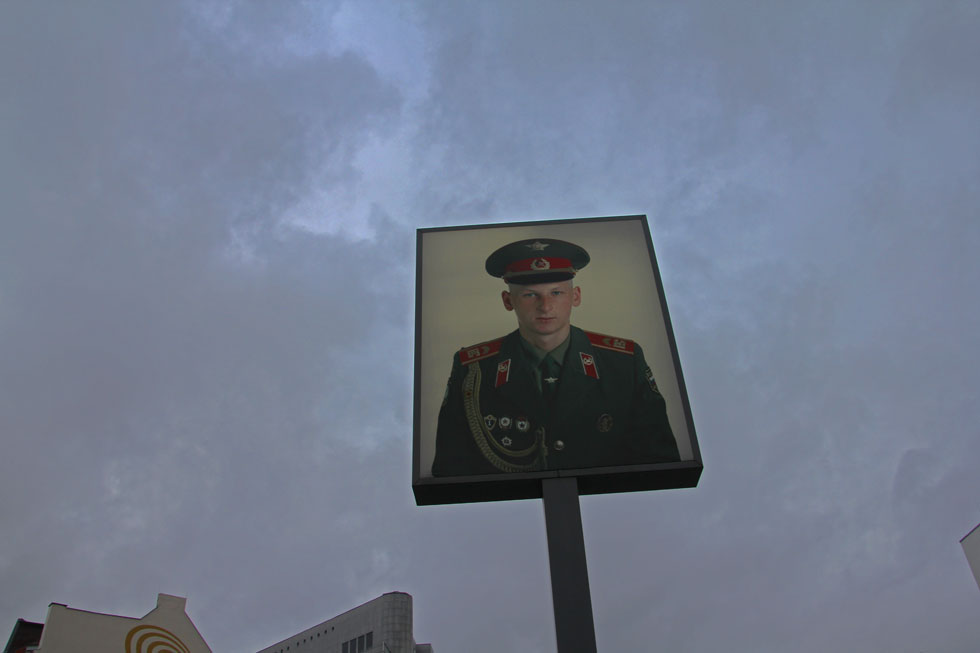 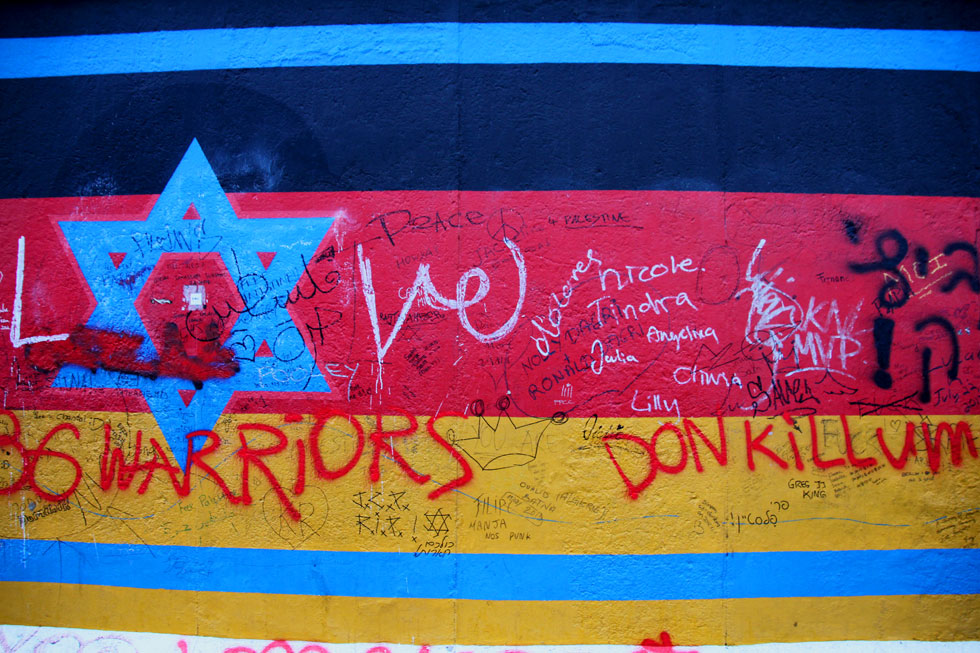 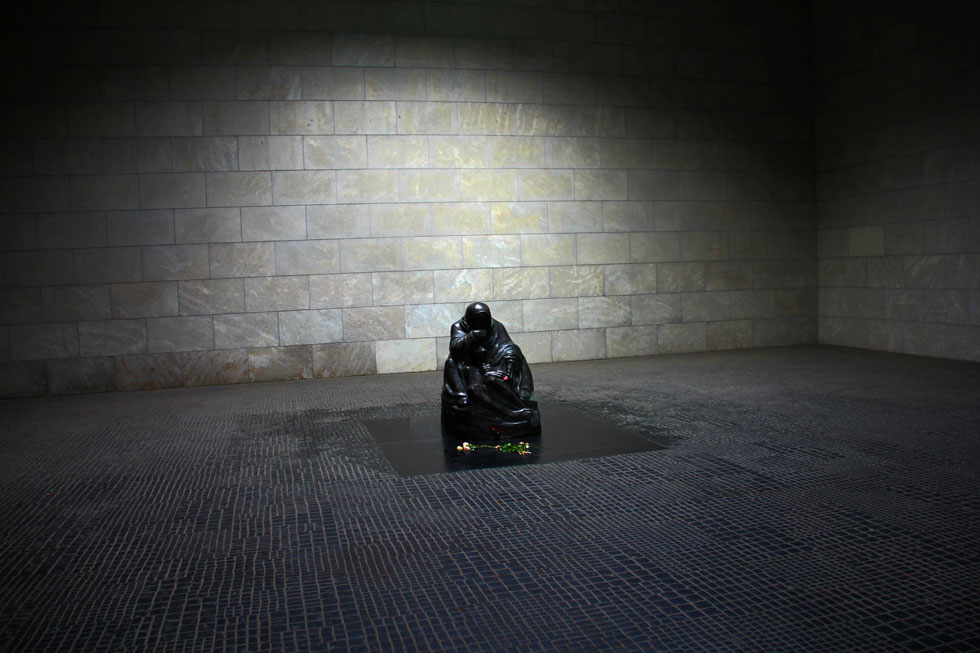